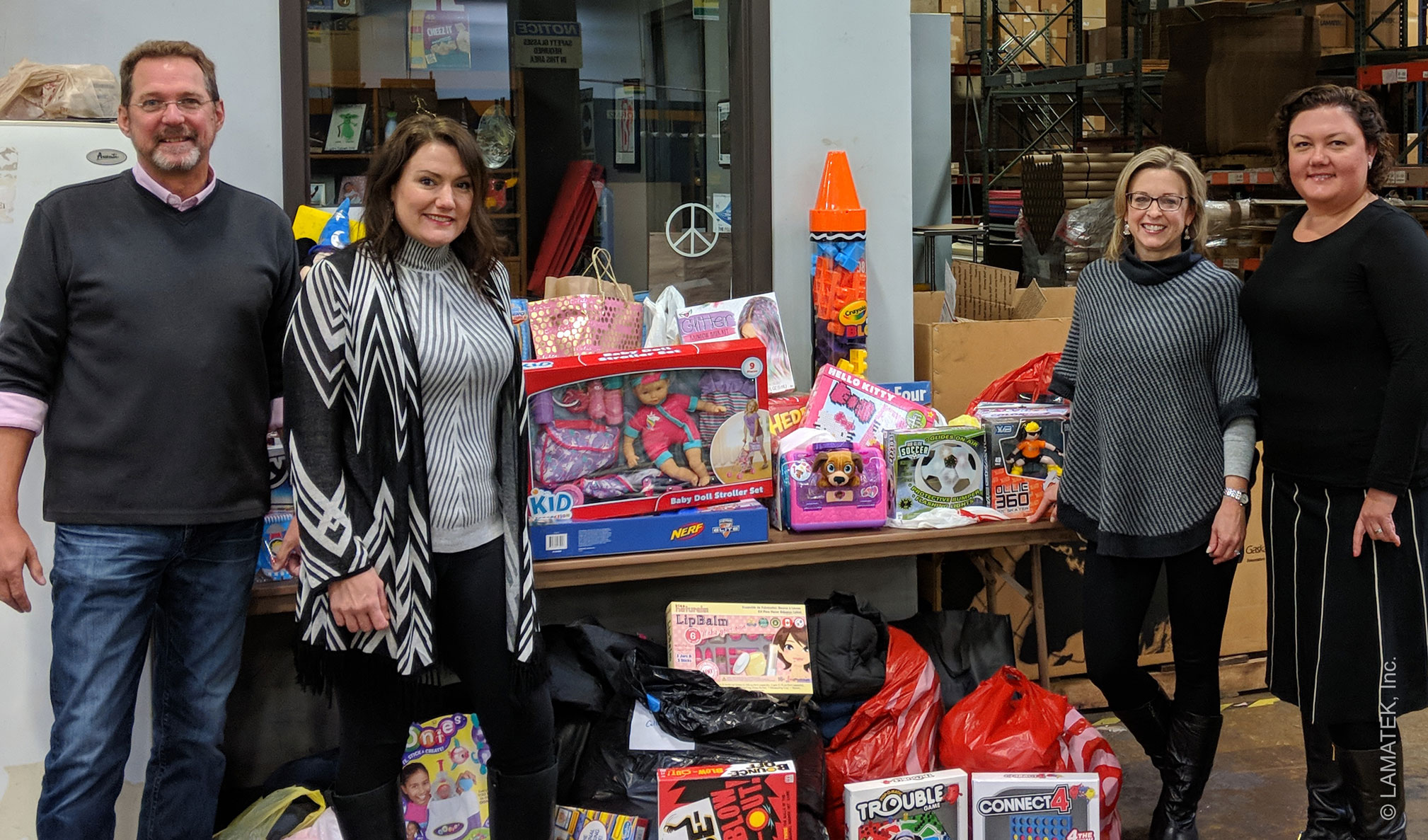 LAMATEK’s annual toy and coat drive is underway! Each year, the South Jersey manufacturer and flexible foam converter hosts a month-long drive for new toys and gently used coats to be donated to the Lighthouse of Philadelphia during their annual Christmas celebration. The company and its employees donate toys and coats in addition to their own time to help out during the party where toys and gifts are distributed to the kids. This year’s event takes place at the Lighthouse center on Friday, December 21, 2018.

The program could not be sustained each year without support from generous people and businesses who are willing to give what they can to help other have a better Christmas holiday. LAMATEK donated new, unwrapped toys for boys and girls of all ages while encouraging employees to participate. Operations Manager, Steve Tice, even rallied the South Jersey Master’s Soccer League Mount Holly and Hainesport teams to chip in at their 5th annual “Christmas Cup” game. The December 8th game also marked the fifth consecutive year that the league contributed to LAMATEK’s effort.

The annual Lighthouse Christmas program reaches out to over 500 needy children, men, and women from the Philadelphia community. The Lighthouse has been running this program for almost 30 years and has provided food, coats, and gifts to to the homeless as well as underprivileged children in need. It is truly a giving event that LAMATEK is proud to be a part of.

In the midst of a global pandemic, people from all walks of life are answering…

Categories
Most Recent
Articles by Month
© 2023 LAMATEK, Inc. All rights reserved.
1226 Forest Parkway • West Deptford, NJ 08066 • 1-800-LAMATEK
Back To Top
Our website uses cookies to improve your experience. We'll assume you're ok with this, but you can opt-out.
ACCEPT - I love cookies.I do not accept.
Review Cookies Policy

This website uses cookies to improve your experience while you navigate through the website. Out of these cookies, the cookies that are categorized as necessary are stored on your browser as they are essential for the working of basic functionalities of the website. We also use third-party cookies that help us analyze and understand how you use this website. These cookies will be stored in your browser only with your consent. You also have the option to opt-out of these cookies. But opting out of some of these cookies may have an effect on your browsing experience.
Necessary Always Enabled
Necessary cookies are absolutely essential for the website to function properly. This category only includes cookies that ensures basic functionalities and security features of the website. These cookies do not store any personal information.
Non-necessary
Any cookies that may not be particularly necessary for the website to function and is used specifically to collect user personal data via analytics, ads, other embedded contents are termed as non-necessary cookies. It is mandatory to procure user consent prior to running these cookies on your website.
SAVE & ACCEPT
Get a Price Quote for PROTEK Surface Protection Film